We enjoy participating in different outreach activities at the University of Nebarska and Lincoln area. Here are some examples of our outreach efforts:

Our group participated in the five-day Nanochemistry and Nanomaterials Explorer camp organized by the Nebraska EPSCoR Young Nebraska Scientists (YNS) program. Participating middle school students learnt about the fundamental properties of nanomaterials, including hands-on experience with the chemistry that is used to prepare, modify, and analyze nanomaterials.

In the framework of the 2013 Nanoscience Camp our group organized and coordinated the Carbon day were we introduced participants to the fascinating world of carbon materials. The daylong schedule included demonstrations and hands-on activities, such as

Here are some photographs from the event:

…and then explains students how fullerene consists of five- and six-membered rings and how to properly make such model.

Our group participates in annual NanoDays that offer fun educational activities about nanoscale science. The event is organized by Nebraska Center for Materials and Nanoscience (NCMN) in collaboration with Nebraska EPSCoR and the University of Nebraska’s Materials Research Science and Engineering Center (MRSEC). In 2013, Nanodays took place in Lincoln’s Gateway Mall on Saturday, April 6, 1:00 – 4:00 pm and included 10 stations that featured 15 interactive demonstrations and two games to engage people of all ages. Nanodays celebrations bring university researchers, staff and students together with science educators to create learning experiences for both children and adults to explore the miniscule world of atoms, molecules, and nanoscale forces. 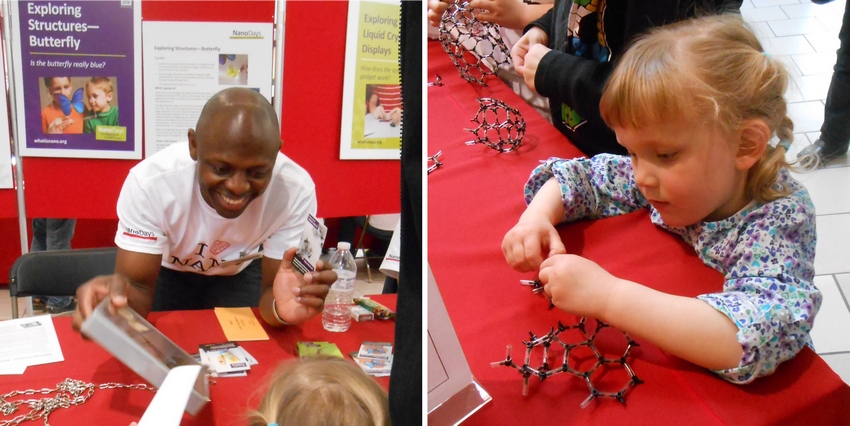 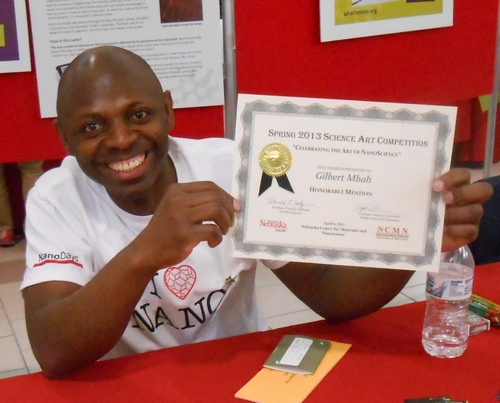 NCMN organizes annual NanoArt competitions to celebrate the aesthetic appeal and creativity of nanoscience. In 2013, two graduate students from our group, Gilbert Mbah and Alexey Lipatov, received Honorable Mention diploma for their participation in the competition, and their works were displayed for the general public. More information about the Science Art competition could be found at the event web site http://www.unl.edu/ncmn/nanoart.shtml

Here is the list of visiting undergraduate and high school students who worked with us over the last few years:

“We previously studied sensors based on other carbon-based materials such as graphene and graphe[...]